Over the past two weeks I have spent some time at home recovering from an ankle reconstruction and I often found myself thinking about roles models. This came about because of the type of books I’ve been reading, the TV shows I’ve been watching, some of my interactions with our gym members, and what I wanted to say for International Women’s Day this year. In this blog post “Role Models: Part One” I want to talk about Fictional Role Models, and in “Role Models: Part Two” I’ll discuss Real-Life Role Models.

On International Women’s Day (IWD) this year I took my time thinking about the message that I wanted to share within my spheres of influence. I ended up sharing about the importance of role models for women. To that end, my Instagram post ended up being this:

krystalgagen: I’ve been thinking long and hard about what I wanted to post for International Women’s Day this year, and then it hit me: books by women, for women. I started going through my personal library for my favourite books and I realised just how many I had (this is not all of them…)

It’s so important to have great role models. Women NEED to see other women succeeding in a wide variety of positions so that they have the confidence to know they can do it too. Books are a great way to give girls confidence.

So, happy International Women’s Day. Celebrate the women in your life, recognise their achievements, and empower them to give anything they want a go.

PS. Although Grant is not a female author, his characters were too good to leave out… Amazing role models regardless. 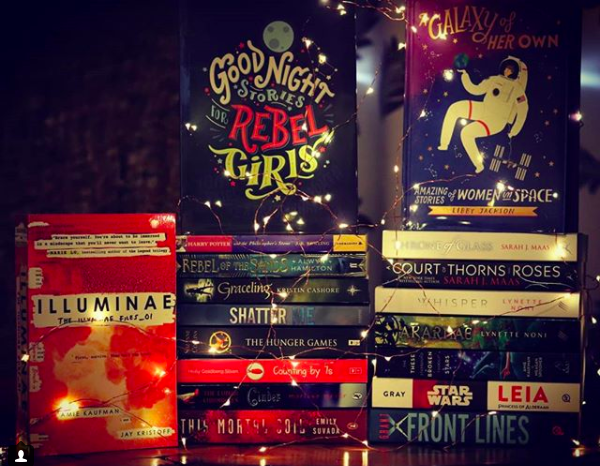 As I pointed out, fictional role models can often take the place of real-life role models, and I think they are equally as important. Here’s why…

I never had a lot of female role models during my teens and early twenties. My mum was my main role model, and my grandmas, but other than that I was limited to teachers. Our family is close and I didn’t get to watch my parents interact with many adult women who weren’t related to me and I certainly never got the opportunity to find a female mentor during my years of development. My favourite teachers in high school were often males and although they were awesome (so knowledgeable and passionate about their subjects), they were still men. I’m in my late 20s now and I’d say that I still don’t have a definitive role model – some of my friends are fantastic influences on me, but I often find myself searching for guidance. When I was growing up, books taught me all I needed to become the person I am today, and I still find inspiration in characters for self growth. Without these books, I would not have had the opportunity to develop my sense of self, and discover who I am today.

There were two series in particular that I feel really shaped who I am today: Harry Potter by JK Rowling, and Song of the Lioness by Tamora Pierce. Both written by women with strong female characters. Here’s what I learned from these two series:

Hermione in Harry Potter
Hermione taught me that it was ok to be smart. I didn’t need to pretend I wasn’t just to have friends in my corner. Her brains and her kindness are just two of the things I love about Hermione. I know that I personally, as 7 year old girl that was told she was “bossy,” needed Hermione to show me that I wasn’t bossy, but rather I was smart, had great leadership skills, and could still have friends.

Alanna in Song of the Lioness
Alana taught me that girls didn’t have to do “girly” things. Alana wanted to be a knight and she worked hard to get there. She taught me that if I truly wanted something, I would need resilience, courage, and to know that even though some people might disagree with me, if I wanted something badly enough I could make it happen.

I don’t remember there being an abundance of novels available to me that had strong female characters as I grew up. These two series are the only two that really stand out in my mind. And so, this got me thinking about how amazing it is that these days there are a number of books with strong female characters, and what that means for the current generation and future generations.

Super Library Marketing: All kinds of marketing ideas for all kinds of libraries.
PIPER3DP
Glitter Glitz and Glam

Book reviews and all things books by Lizzy Baldwin