This book was thrust into my hands by one of my avid year 7 readers. She said I had to stop reading everything else and give this a go. Whilst it isn’t one of my favourite books of the year, I can see why it grabbed her attention. So, what makes Follow Me Back by Nicci Cloke a book that compels year 7 students to excitedly express themselves in loud ways over their feelings for this book?

Aiden was the new guy in town two years ago but, as in most small towns, he is still considered to be the “new guy.” He is a  football star with the potential to play for a premier club and also considered to be a nice guy.

Lizzie Summersall has always been the quiet girl with little to say unless she was on stage in a drama production. She dreams of being an actor in theatre productions, but first she must learn to deal with a semi-famous big sister . Cheska is on the local soap opera show filmed in and around their home time. Lizzie despises her sister and makes it well known, often having to put up with ill feelings towards her due to her sisters actions on and off screen. When Lizzie goes missing, her sister uses this new and scandalous story line to her advantage, raising questions regarding her involvement.

The investigation centres primarily on Aiden and his relationship with Lizzie, despite him denying that they were ever more than casual acquaintances. Aiden begins to realize how lonely he is without Lizzie, how online and real life personas can differ, how easy it is for people to pretend online, and how quickly a crowd can turn against someone they once called a friend.

When I first started reading this book, I was intrigued straight away. The fact that is starts with the police visiting Aiden’s house to tell him the news and how he immediately acts like he’s covering something is very clever. As the story progresses you begin to realise that perhaps Aiden is not the nice guy he seemed to be in the beginning.

There was a point where I started to feel like the story line got a little bit too out there. I kept thinking “surely these teenagers can’t be this naive?!” At one point I’m pretty sure I yelled “JUST STOP IT!” and threw the book down in a fit of shock and disbelief. However, when I really thought about what was unfolding, I realised that perhaps teenagers actually do think, feel and react the way these characters did and that’s why its so important to have these characters as role models to show just how silly this behaviour is and how much trouble it can land you in.

In terms of how the story is written, it’s very clever. It starts from Aiden’s perspective; for someone that reads a lot of books from a female character’s point of view this was a nice change! It then begins to alternate between the present and the past via messages between Aiden and Lizzie. After a while a few other characters’ perspectives are added in – this only adds to the suspense.

There is mention of sex, a few swear words, and some inflammatory name calling, however these mentions are brief and done as tastefully as possible. In this day and age it would be naive of me to believe that 13 year olds had not heard or used these words and discussed these things. Therefore I would recommend this book to all teenagers as it explores online safety, relationships, bullying, and family, and is hopefully enough of a shock to the system to make them think twice about their own actions online. 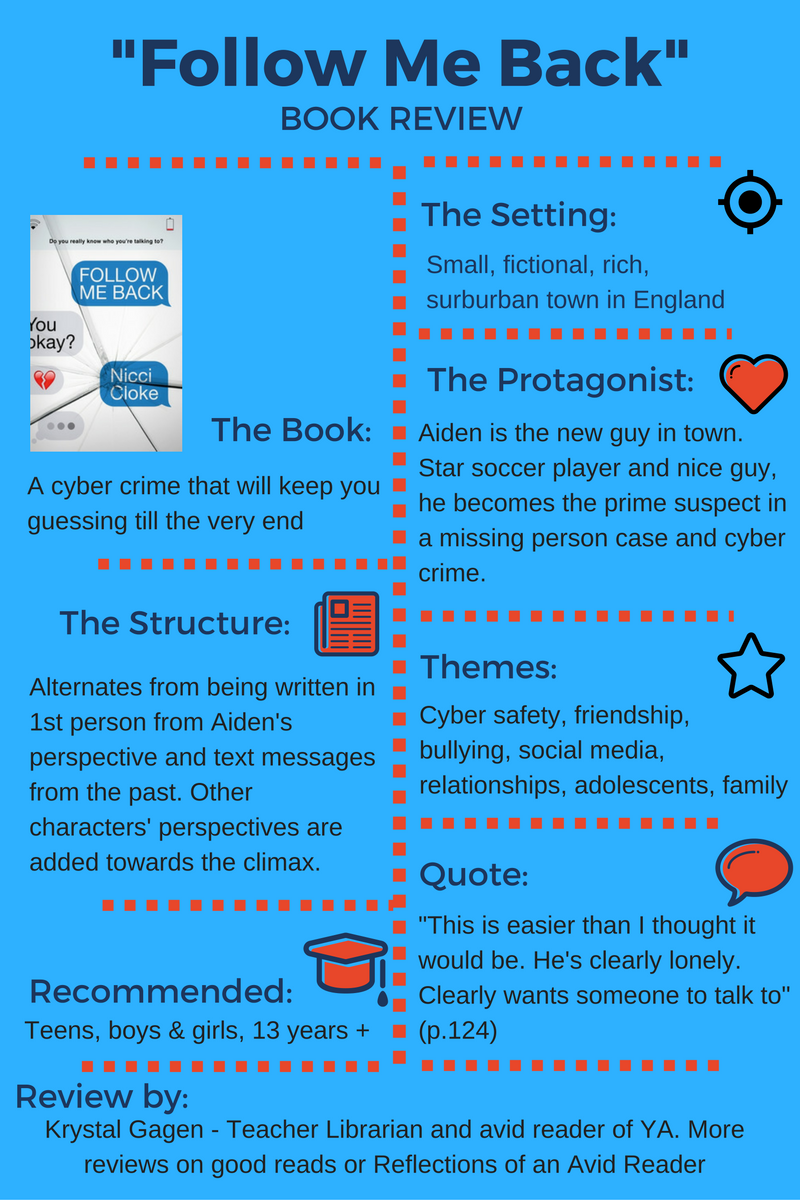